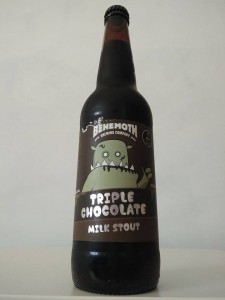 “We don’t think we are going to have to hire security guards for the beer fridge at your local store like a famous chocolate milk. But if you like chocolate you should probably take this home. Have it after dinner. We don’t want to ruin your appetite. mmmmmm chocolate.”

Served in a beer tulip. It’s pouring a dense black hue that’s formed a short, temporary head which eventually settles to a thin sheet. It laced quite well considering its shortcomings.
All is forgotten once we take in this absolutely superb aroma. It’s simply oozing chocolate, dark malts, cocoa, vanilla and lactose. We now understand why they’ve used the word “triple” in this triple chocolate milk stout. Also picking up a slight sweetness…marshmallow or rocky road-like in its delivery. Supreme indulgence here folks.
The mouth feel is not as rich and heavy as we were predicting it to be – certainly could have something to do with the moderate ABV (6.5%). Well balanced hop to malt ratio. Mild-medium Co2. Actually….It’s surprisingly approachable!
Some of the descriptions of this beer are not only funny but spot on. One of the best described is “it’s just like a chocolate milkshake only beery.” The balance between the chocolate, the sweet vanilla and the creamy lactose is delish! Intermittent bitterness from the hops, lightly toasted malts and subtle milk sugars fill out this excellent stout.
There may be a few hidden surprises to this beer but one that doesn’t surprise us is the fact that this stout picked up the people’s choice award at Beervana 2016. Utterly jam packed with chocolate flavours but also well supported by a litany of others. This is one seriously tasty stout.