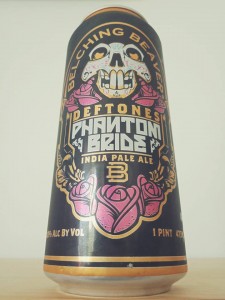 “Deftones are joining the ranks of Iron Maiden, Motorhead, Megadeth and many others in releasing their own signature beer. The California natives have teamed up with San Diego’s Belching Beaver Brewery for a beer they are calling Phantom Bride IPA, named after their recent single.”

Aroma: Really interesting, it has a strong malt structure to it…grainy straw/hay with wheaty accents. The hops blend in to it really well with the lemon, pine and orange peel from the citra
and simcoe dominating. Picking up a spicy undertone as well – peppery and almost rye-like in its delivery. We dig it.

Flavour: Tasting a bit more dank hop and weedy notes on the palate. It still offers a lot of that grainy straw and wheat malt alongside pine needle, peach, orange citrus, earthy herbs and subtle onions. The peach carries through in to the dry and grassy finish which endures nicely.

Mouthfeel: Thin and crispy but never watery. It holds a medium weight with the 7.1% AbV nicely tucked away. 55 IBU – spot on.

Overall: Can’t say we’re totally blown away but there are some real strong, and let’s say unique, attributes to it which definitely stand out. Solid drop.