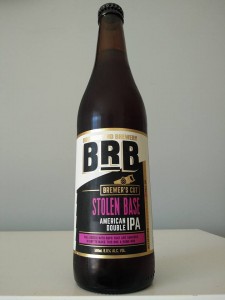 “Religion in America is baseball, closely followed by religion. This cultural extravaganza can’t be properly appreciated without a refreshing brew such as the Double IPA. Our version has a rich, full body, a palateful of smooth malts and supersize-me hops that leave it bitterer than a Hollywood divorce.”

Served in an IPA glass. This DIPA pours a relatively clear amber with a slightly red tint. It struggles to produce the short cap that quickly recedes to a halo. Although it does manage to post a consistent set of rings as it ebbs.
Interesting aroma, quite sweet actually. There’s a prominent yeasty sweetness that smells a bit like bubblegum. Behind it we can pick up hints of sherbet, rock candy, honeydew, mild acetone and a cloying honey and or caramel accent. Something a little floral about it too. Weird. Don’t know if it has anything to do with the Zythos hops as we’ve never encountered this type of hop before. A strange one.
Pretty full in the mouth. It has a rich, malty profile that lends it this thick, velvety texture. Mild bitterness for the 52 IBU. Extremely well hidden ABV of 8%. Not a lot in terms of Co2 – just the slightest sparkle.
Again that ultra sweet and artificial character presents itself. The fruity sweetness seems to be coming from the yeast instead of the hops which ultimately gives it a funky and estery taste. Getting a rosewater-like flavour before it’s rounded off by a strong floral note.
At first we thought it was quite a fun beer but by the end it’s cloying and hard to stomach. It’s like the brewers have blended an IPA and a Belgian tripel together. We’d even give them points if they had labelled it as such but we’re really struggling to see how this is an American IPA. Very underwhelming.