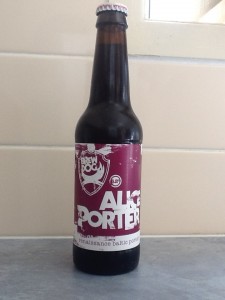 “Few beers are shrouded in secrecy like the porter; a beer whose roots are said to be punctuated by hurried footsteps along cobbled London streets and swirls of mist from atop the River Thames. Decloaked and radically reinvisaged, BrewDog’s Alice Porter is a 6.2% sacred union of one 300-year-old recipe and two cross continental hop varieties”.

Served in a shaker glass it pours mat black with a lasting 1 and half finger tan head. Good lace. A vigorous swirl of the glass lifts subtle chocolate malts, cocoa, vanilla, light smoky hints and cherry. Mild-medium carbonation and medium body. The flavour is actually quite delicate, we picked up slightly roasted malts and chocolate initially. A very mild spiciness is coming through, which could maybe be put down to the use of Japanese Sorachi hops. Supposedly there are red fruits in the brew, but we are getting more of a raisin/sultana flavour in the finish. At 6.2% the alcohol volume was well hidden. A very passive and approachable porter….overall it’s tasty but nothing overly memorable. Not bad.