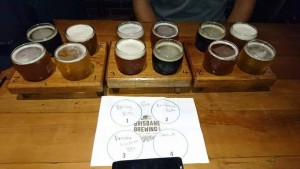 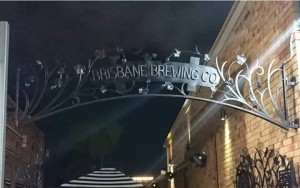 Ever since we, and a few others, took a short trip to Brisbane city a couple of years ago we’ve been itching to go back for a brewery tour. Just a few minutes south-west of the city center is the trendy, Newtown-esque suburb of West End where you’ll find an extensive range of restaurants to experiment with and craft beer bars to wet your whistle in. Just up the road from Archive bar (Brissy’s equivalent of The Local Taphouse) is Brisbane Brewing Company, our first stop on the tour. Right from the beginning, the precedent was set high as we entered under an extravagant cast iron sign that lead us through a slightly narrow walkway to the doors of the establishment. The interior was also really cool with the kitchen/dining on the bottom level and on the top level a full view of the tanks are off to the right with the bar set right in the middle. The shining ten tap system pours 8 of their core beers with two taps reserved for a cider and the other for an experimental. As we were only there for a short time we chose a paddle with their Pilsner, Pale Ale, IPA and Stout. The Pilsner was a lovely example in the traditional Czech style; spicy, herbaceous, light on and super sessional. The Pale Ale was the pick of the beers with a lifted fruity aroma, well balanced body and bitterness and a clean citrus finish. The IPA was simple and tasty with a slightly restrained profile while the Stout was delicious, smooth, creamy and lightly roasted. In the unlikely event that none of their beers tickle your fancy there is a great selection of bottled craft beer in the fridge just in case. We had a good time here, the atmosphere is chilled and really friendly and the staff were knowledgeable and very easy going. With all of this situated, in our view, the best part of Brisbane this is certainly one brewery that should be on the visit list if you’re planning a trip to the sunshine state.