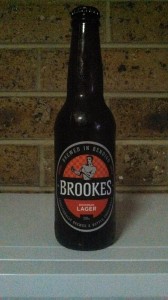 “With a big malt body and the crisp aroma of old-world noble hops, our Bohemian is a real lager, made with pride and sweat.”

Picked this one and a bunch of others from this brewery up in a small little independent bottle shop in Bendigo. The head brewer (Doug Brooke) and his wife initially opened the brewery in 2013. A year later they were opening the doors to their brewery bar. Poured into a shaker glass the appearance displays a translucent amber that reveals orange hues when held against the light. The head stubbornly held for a minute but eventually collapsed to a fine covering without much lacing. For a lager this aroma produces a hefty hop profile. New world hops in fact bring up subtle pine, spice and citrus but balance out nicely with earthy malts, caramel and grain. Mildly carbonated with a soft, rounded mouth feel. Initially there’s a slight tingling bitterness on the tongue. Citrus, grain and toffee malts open up through the mid-palate which leads to a soft fruit-driven finish with a nice bitterness in the tail. The 5.2% ABV is slightly above average but is certainly well hidden. Just a very mild bite at the back end adds good depth and a touch of warmth on this cool night. Impressive. Not bad at all for a small micro brewery in Bendigo. Big ups guys.