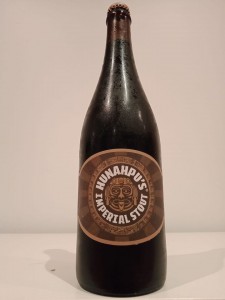 “We brew Hunahpu’s Imperial Stout once a year and release it only at the brewery on the second weekend in March. We will continue to do so until the end of the cycle.”

Appearance: Sump oil with a short fizzy head which takes on an incredibly dark bronze/ochre brown-like colour. It doesn’t hang around long… eventually forming a collar with spotty lace as we go.

Aroma: So much to unpack. The chilli and cinnamon seem to come through the strongest. This is despite a wealth of rich and hedonistic dark malts, raw cacao, salty dark chocolate, raw vanilla bean, toffee fudge, licorice, espresso, soy sauce/molasses and cigar skins. Also picking up a faint hint of peppermint but it’s surely our olfactory’s confusing the scent of the chillies. Amazing!

Flavour: Follows on with the dominant cinnamon and chilli peppers. Well supported by vanilla, raw cacao and mild dark fruit sweetness. Soy sauce and salty dark chocolate hanging around the mid then leading in to a warm and spicy finish with tonnes of charred malt, espresso and dark chocolate on the back end.

Mouthfeel: Thick beer soup…but with added oiliness and warmth from the 10.2% ABV and chillies. Low Co2.

Overall: The depth, complexity, richness and unrestrained vigour is what makes this stout so sought after. Very similar to the ’16 vintage but maybe a bit less Asian spice and more chilli, salty chocolate and cacao. Mind blowing…as usual!