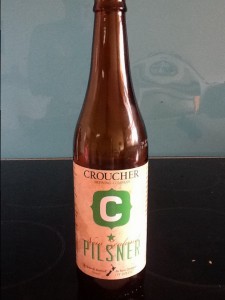 From the lads in Rotorua NZ, this brew pours a honey clear-golden colour with big carbonation bubble and a foamy 1 inch head which slowly fades. Riwaka and motueka hops used here and the smell is a vegetable or herb based(cabbage??) but citrus-like especially grapefruit and peach with a bit of pine. Mouthfeel is mild to moderate and there is definate bitterness, surprisingly high for a pilsner. There is nice malty hit, almost sweet and cookie like. We get subdued grapefruit, orange peel.  As we drink we see lacing on the flute glass. The alc vol is standard 5% and easily drinkable. This is a bold pilsner, far more depth than say an urquel. Very smooth to drink.  Interesting to note this beer was champion pilsener for 2010 for 2012 at australian and NZ beer awards. We think it’s a good drop.