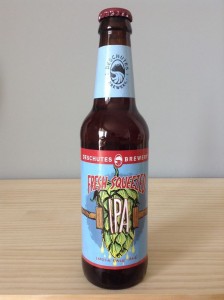 “This mouthwateringly delicious IPA gets its flavour from a heavy helping of Citra and Mosaic hops. Don’t worry, no fruit was harmed in the making of this beer.”

This IPA is only 2 years old and already it’s collected a stack of awards. In 2014 it won bronze in our very own AIBA (Australian International Beer Awards) another bronze in the International Beer Challenge and a gold in the World Beer Awards. In 2015 there is a silver at the NABA (North American Brewing Awards) and another bronze at the International Brewing Awards. Alright, enough talk let’s rip in. Served in a shaker glass. The heavy amber appearance reveals some copper hues when held against the light. A frothy two finger head is whipped up but it gradually deconstructs and settles to thick patches over the top. All the while, healthy lacing is being released all the way down the glass. With only a modest hop bill (Citra, Mosaic and Nugget) these brewers have been able to extract the highly aromatic alpha acids out brilliantly. Big notes of grapefruit, passion fruit and mango explode out of the glass. Some firm wafts of pine come through as do more subtle suggestions of caramelised sugars and sweet toffee malts. Not bad, but we’d be lying if we said we weren’t expecting a little more. The texture of the beer in the mouth is a little oily, maybe a little soapy. The body is light and the 60 IBU isn’t as pronounced as we were hoping. No real aggression or hop bite that we would expect from a West Coast IPA. the 6.4% ABV is well hidden though, making for a highly sessional IPA. Upfront an impeccable balance of crisp pine needle and sweet, sugary malts is displayed. A fusion of ripened tropical fruits is injected as it moves on through the mid. Only the slightest hint of warmth from the alcohol is felt as an ultra clean, piney finish completes this sharp and well executed IPA. Well, at one stage we were a little hesitant but the sheer tidiness of this beer has to be credited. We talk of balance in some beers but this has to be up there with some of the best balanced IPA’s we’ve ever drunk. Super sesional and highly palatable. Top shelf stuff.