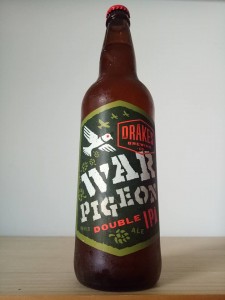 “Our newest IPA is dry and bright with the golden hue of a fading day. What starts as a faint hum builds to a roaring crescendo as the War Pigeons take to the sky. A telegraphed warning comes over the wire, but it’s too late. You’ve been hit. We deployed the freshest hops in our hop arsenal and the payload is a blast of dank, floral citrus. Surrender to the aromatic blitzkrieg as the hops rain down.”

Appearance: Slightly hazy and golden/amber in colour. It forms a big three finger head that holds its shape and decorates the sides of the glass as it ebbs.

Flavour: Clean, citrusy, fruity and well supported by a bready and slightly biscuity malt structure. Hints of guava, pineapple and pine resin roll in to a nice and tidy finish that offers subtle grassy notes, pithy citrus and herbals with good duration on the back end.

Mouthfeel: Crisp, reasonably clean and oily. Some warmth from the booze (8%) but pretty well contained. Medium weight and good carbonation.

Overall: Solid IPA. There’s a lot of similarities to SN hop hunter with its super clean and polished profile. Haven’t seen this brewery on our shores before so here’s hoping we see more of them. Really good DIPA.