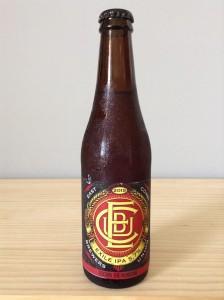 There’s a very interesting story behind this IPA. Essentially, the East Coast Brewers Union is a collab of 11 breweries (Temple, The Winston, Rutherglen, Shark Island, Barrier Reef Brewery, Rogue Wave, Boneyard, Bruny Island, Bale-Worker Project, White Lies and Asahi Laverton) who were all unfortunately taken for a ride by Core (a ‘company’ that made stainless steel tanks). All the breweries who made up the Union stretched from Bruny Island to as far as Cairns on the northern east coast of Australia so it was only fitting that their name was consistent with this. This IPA is a sign of the solidarity and character that is rich within the craft brewing movement. In case you were wondering why the label looks like an AFL club logo….well, Temple brewing are based in Carlton and it’s the main inspiration behind it. OK let’s crack on with the review.

Served in an IPA glass. The slightly hazy amber pour knocks up a very well retained finger and a half of foamy white head that omits a tonne of soapy lace trails as it ebbs. The geographical aspect of this IPA also influenced the style. As this is an East Coast IPA (as opposed to the massively hopped up West Coast style) a more prominent malt aroma is detected. Gorgeous wafts of grapefruit, passion fruit and mango are still front and center but the grainy/biscuit malt base plays a bigger role in the make up of the aroma. A certain dank, vinous scent also comes through too. Very nice. In the mouth the bitterness is quite well contained but still vigorous enough to provide a dry texture. The body is medium in weight and the carbonation level is moderate-medium. A delicious cocktail of tropical fruits meet the taste buds on entry. This lovely transition in to vinous, resiny pine and grassy hops is smoothed out by a sweet, biscuity malt through the mid. A long, dry and herbaceous finish ensues displaying respectable length. East coast? West coast? Whatever your preference it’s hard not to really like what this IPA is bringing. More than enough hops to keep hop heads like us happy but with a solid malt backing that nullifies any real harsh bitterness. Who said too many cooks spoil the broth? Definitely not the case here. Solid offering.