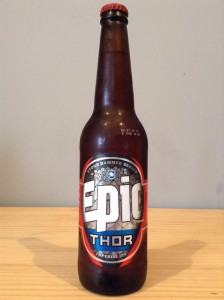 “Inspiration for Thor came from Luke’s trip earlier in the year to the Craft Brewers Conference in Philadelphia. While there he drank several different examples of the developing and evolving new IPA style for the East Coast. East Coast IPAs are identified by their cloudy appearance, which comes from hop haze, and a big hop aroma and juicy hop taste (the kegged version of this beer has been kept cloudy, but the bottle version is filtered and bright).”

Served in an IPA glass. Thor offers a bold amber hue with impressive clarity. A puffy two finger overlay props up, maintaining itself well and casting a set of rings down the walls of the glass.
The first thing we notice is this super juicy sweetness on the nose that could only be described as apple and blackcurrant roll ups. Loads of resinous pine, herbs and spruce, ruby grapefruit, blood orange, meringue, boiled candy, aniseed and a slightly astringent boozy warmth also gush out. We get a honeyed and or caramel malt adding to the considerable sweetness as well. Hhhmmm don’t know what to make of this as yet.
The mouth feel is quite big and boisterous but at the same time it has a silky smooth texture to it. It’s medium in body with quite a restrained bitterness for an IPA of its size (8.8% ABV).
Upfront we can taste all that sharp and prickly resinous pine with this recurring (and at times cloying) boiled candy sweetness. It’s emphasized by a dank herbaceous note along with a warming heat from the booze across the mid. An assertive bitterness is introduced leading in to a sharp, vinous and peppery finish that offers decent length on the rear palate.
Disappointed would be a harsh summary, unsatisfied would most probably sum up our feelings right now. This cloying sweetness for us was its downfall. Maybe it was just the fact that we couldn’t find a trait big enough to slot in a cheesy quip about Thor and his big swinging hammer? Either way, we’ve had much better from Epic.