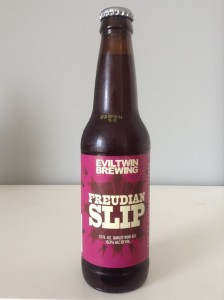 “Did you also at some point in your life get seduced by promising words like ‘probably (not) the best in the world’, ‘it (doesn’t really) work every time’ etc. This American Barley Wine says it how it is. It’s intense, attention seekingly hoppy and definitely your kind of beer. A beer with a big ego, drive and a huge thirst for recognition”.

As we mentioned in our last review for this brewery, it’s really positive to see these guys branching out and brewing some creative beers like this. Big ups. Served in a beer tulip the light brown/mahogany pour produced a small tan head that settled to a rim of foam around the edge of the glass. Despite the lack of head retention the lacing was still OK. The aroma is big on malts with a strong, earthy reference to port. Hints of raisin, jaffa, toffee, fig, nuts, alcohol and licorice are well balanced out by a firm herbal hop presence. We weren’t sure if we were keen initially but we think we’re coming around. The mouth feel is quite silky with a full bodied flavour. Mild carbonation. Upfront a sharp booze burn is accentuated by an aggressive hop bitterness which subsides during the mid-palate. Toffee, dough and cognac form quite late just before a rich, creamy finish moves in and displays brilliant length. A solid booze sting (10.3% ABV) on the back end completes an overall potent and dynamic beer. We found this bad boy got better once it warmed up, so best leave it out of the fridge for about 10-15 minutes before drinking. Bottoms up!