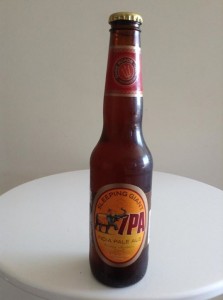 “Our tribute to the beers that once quenched the thirst of parched colonials at Admiral Gage’s East India station. This UK-style IPA is rich with caramel malt and overripe stone fruit character, balanced with a big bitter finish”.

We have always been a little skeptical of this Western Australian brewery as the beers they brew seem to be mainly entry level, and teeter on the edge of commercial brewing. Anyway, this we served in an IPA glass, the translucent amber pour provides a 1 inch white head that holds up well, eventually settling to a thin cap on top. Good lacing. A generous swirl of the glass only manages to conjure up mild wafts of pine resins, musk, citrus, white pepper, caramel and marmalade. Not a great deal of depth happening with the aroma but there is enough there to enjoy. Quite oily in the mouth with medium carbonation and mild-medium body. Initially the tongue is met with earthy notes, a mild bitterness opens up in the mid-palate and along with it come hints of citrus peel and a subtle alcohol warming. Mildly bitter finish with decent length. 5.4% ABV is quite low for an IPA, yet we still pick up hints of it in the flavour. In conclusion, what we first thought was right, a good IPA for an entry level craft beer drinker but no stand out flavours for the more adventurous.