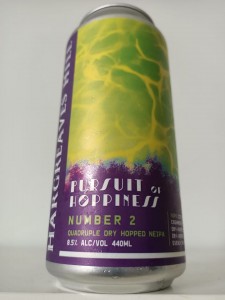 “A Quadruple dry hopped NEIPA. We have upped the dry hopping regime in this beer to display how hops can work in symetery without overpowering each other and maintaining balance. The ultimate goal at the end of the day is drinkability so we have dialed down the haze factor of a “traditional” neipa and created a beer you could swear would not be 8.5% dangerously drinkable.”

Appearance: Straight off the bat this doesn’t look like a NEIPA. Almost 100% clear golden amber with a thumb of white foam perched on top. Good retention and lace as it ebbs.

Aroma: Even the aroma doesn’t smell like a NEIPA. If we were blindfolded we’re going with a West Coast IPA every day of the week. She’s crisp and clean. Notes of orange peel and grapefruit, pine, mango, tangerine, melon, pineapple and unripened peach. Very minimal malt profile with some warmth from the booze tickling the nostrils.

Mouthfeel: For a beer that shows its weight (8.5% ABV) in aroma it mysteriously hides it on the palate. Still, it’s crisp and zippy with fine CO2. Light-moderate body.

Overall: We’re not sure how these guys can go from their first release to this and call it the same style. POH #1 was a true hazy…turbid, juicy and even milkshake-like whereas this is almost completely West Coast. Almost Korben D-esque. Very confusing.