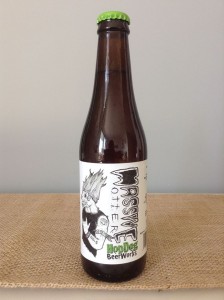 “In an ever evolving industry, we are reminded never to forget our roots. Like how amped-up Double IPA’s once came from a hopped up pale ale born to fair the long sea voyage, and how modern rook and metal once dipped their collective toes into New Wave and Glam before punk and Hair metal. It’s true. The Massive Otter is a new world ESB – saluting it’s English heritage with 4 all English malts before thumbing its nose to tradition by employing Australian & New Zealand hops to fill it out. The Otter’s MASSIVE malt profile hints at biscuits and toast, while the Ella and Riwaka hops give it a firm bitterness and spicy, fruity melon & citrus aromas. This is more of an arena rock spectacular than a club show. Hit the lights! Pump the smoke machine and don your spandex like an anthropomorphic otter”.

Served in to an English pint. The heavily clouded amber appearance reveals a fair bit of sediment, some of which remain suspended with the majority settling on the base of the glass. Like most Hopdog beers, upon opening foam comes gushing out of the bottle so a quick and relatively aggressive pour arouses a big, frothy 3 finger head which peels off and retains a good 1cm cap. Laced healthily leaving a sheet of dense residue clinging to the glass. Another hallmark of Hopdog beers is this certain Bretty aroma that provides plenty of funk, sour lemon, barnyard, spice and hay. A vigorous twirl of the glass awakens deep tangy citrus along with very muted hints of toasted bready malts. In the mouth it’s smooth with a touch of dryness. Has a slightly frothy texture with medium-high Co2. Quite tart upfront, a little acidity from the lemon and a touch of the 45 IBU adds to the strange fore flavour of this ESB. The focus on the bretty, sour characters seem to overpower anything else this beer is offering. A touch of citrus comes through before a dry finish completes a pretty ordinary ESB. By the time we’d almost finished the amount of sediment that has settled on the bottom was off putting as we’re feeling chunks of it as we drink. Disappointing beer with no real ESB attributes whatsoever.