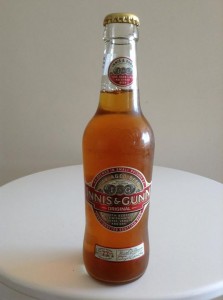 “This is our firstborn brew, whose accidental discovery started our story in 2003. Its originality also lies in its singular taste – notes of biscuity malt and vanilla swirling within a creamy, mellow character. A pioneering beer, its flavour finds favour with brewing juries, blind tasting panels and barflies alike”.

Picked up this interesting looking beer at Dan Murphy’s, it is the first time we’ve ever heard of this Scottish brewery. Served in a shaker glass the translucent amber pour managed to construct a finger of white head before completely collapsing away to nothing at all.

Quite a complex aroma here, initially it’s so obviously British – anti fruit with big sweet malts and earth coming forward with additional wafts of oak, vanilla, whiskey, damp wood, butterscotch and honey putting an exciting spin on it. There is also a really sweet, floral undertone in here too, similar to pot pourri. Really good depth.

The mouth feel is a little thin with low carbonation. Medium bodied. From the outset flavours of whiskey, oak and vanilla dominate the taste buds. The mid-palate picks up sweet, almost cloying toffee malts and dough delivering a malty finish with lingering oak and a subtle alcohol warming.

At 6.6% ABV we can’t fault the levels of flavour here, although it does become very sweet. Although the price is pretty cheap one is definitely enough. OK without bringing anything spectacular.