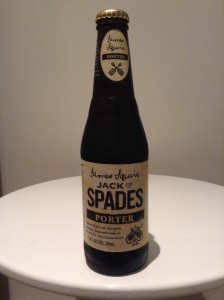 “Back when rum was the unofficial currency, it took a real gambler to bet his future on brewing. But James Squire was never one to shy away from a challenge, quickly building a fortune from his brewery and tavern. Though it could be suggested serving beer to Australians was something of a sure thing…”

Well you won’t see us reviewing many James Squire beers but we thought we’d give this porter a crack. Served in a beer tulip, just below room temperature the dark cola pour produced a 1 inch tan head that slowly collapsed to patchy foam on top. Minimal lacing. Some really nice aromas on offer here, we’re getting plenty of roasted malts, nuts, chocolate, coffee, vanilla, leather and cocoa. Much more than what we were expecting. In the mouth it’s oily with medium carbonation. Medium body. Picking up some nice roasted characters upfront. Malt and cocoa come through the mid-palate and finishes slightly sweet with a nutty back end. Only 5% ABV which we feel is too low, this beer could have really benefitted from a higher alcohol volume. Though, in saying that we think they’ve done well to produce the flavour profile this porter possesses. Not bad.