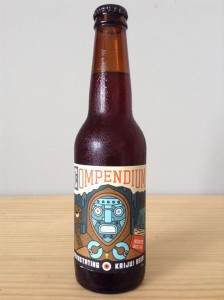 “Compendium is the third in our series of new releases made especially for the Great Australian Beer SpecTAPular. We’ve called this beer a Monastic Red IPA because we’ve used a Belgian Abbey yeast strain, fermented at a warmer temperature to get more fruity, bubblegum and banana aromas. There are seven different malts for complexity and of course a metric boatload of hops to help wallop your olfactories.”

Served in an IPA glass. This Monastic red IPA offers a rich crimson hue with a foamy two finger overlay. The head stubbornly retracts but maintains a thick blanket which renders a set of rings as it ebbs. In usual Kaiju fashion the olfactory’s are besieged by aggressive American hops that impart grapefruit, mango, pine resins and peppery spice. Enter the red characters. Caramel and toffee are the front runners but one wouldn’t want to forget the Belgian heritage of this beer as wafts of candy sugars, marmalade, Cointreau and mixed berries takes shape. An impeccably balanced aroma. In the mouth it’s full-ish with a thick and chewy texture going on. The 7.2% ABV provides a subtle sting as a well concealed bitterness draws out nicely. Co2 and body are both medium. The flavour profile kicks off with an unctuous toffee malt that’s quickly fused with pine resins and an eager hop bitterness that really begins to heat up mid palate. Bitter citrus fruits highlight this bitterness and leads in to an extremely dry, somewhat toasty and spicy finish that reveals hints of berries on the back end. Again Kaiju have stepped up to the plate with this beautifully balanced but hop charged brute of a beer. It’s just another success story born out of the brilliance of GABS where this beer was entered and scored very well, urging the brewers to bottle it in answer to the loud cries of the punters. Kudos Kaiju!