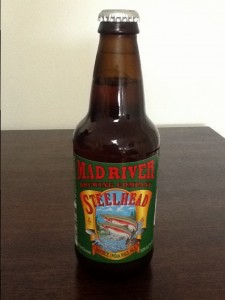 This is a double IPA from northern California, USA, a brewery that can proudly say were pumping out craft beers since 1989. You will see the name ‘steelhead’ (a fish arguably placed in the trout family) on not only 2 of their beers, but 3, the extra pale ale and the stout.

Served into a tulip glass, a clear, dark amber pour generates a compacted 1cm head which holds firm but steadily shrunk to a fine covering on top. Firm boozy aroma with jammy overtones. Canned tropical fruits, sweet caramel malt, pineapple, plum, marmalade, caramelised sugars and mango come through in abundance. The mouth feel is smooth with medium carbonation and a slight alcohol astringency. Quite grippy on the tongue but that would mainly be due to the solid IBU (95). A solid showing of alcohol warmth on the palate. More sweetness of caramel malt, stone fruits (peach??) initially as juicy resinous hops move in on the mid. Swishing around the mouth showcases the balance of the strong ABV (8.6%) with a bit of peppery rye-style spice in the finish. There is lasting bitterness on the palate. Maybe there could be more hops used here because for a DIPA it’s quite malty but in saying that the balance is well presented. Lots of oily film being omitted down the glass after getting through it. Overall, this DIPA is nice (ratebeer.com gave this a 93), but we have had better DIPA’s. Can’t complain though, a very well balanced beer.