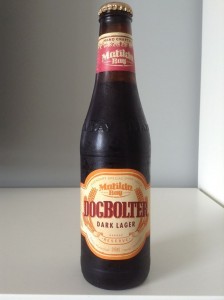 “Dogbolter was one of the first two beers Matilda Bay ever made. It got its name from a particular incident in the early stages of its brewing. Dogs have always been around breweries, as have cats – cats keep the mice under control, dogs keep the cats under control. One day in the early stages of experimentation with it, an extra-strong batch of the beer was thrown out, and the brewery dog got into it. The dog flipped out, made a run for it, and Dogbolter was born”.

Poured into a dimpled mug. The dark brown appearance reveals a soft crimson hue when held against the light. Capping it off is a finger’s worth of foamy tanned head which steadily reduced to a light film. Laced reasonably well, a bit streaky and wet but enough to leave some good residue. Quite well balanced on the nose. We get a good whack of decadent chocolate malts and cocoa against a very delicate grassy hop character. There is a certain fruity sweetness that’s creeping through too, almost like cherries or chocolate covered strawberries. Very nice. Subtle undertones of toffee, molasses and licorice really bring up the bottom end well. Decent aroma for Matilda Bay! Quite thinnish in the mouth which is a tad disappointing. Carbonation levels are mild and the body is about medium, leaning more to the lighter side if anything. The upside is no flavour is forsaken for a soft mouth feel. The taste buds are treated to a dose of caramel, bready malts and a hint of molassesy sweetness upon entry. As it pushes forward the mid takes on a subtle roasty bitterness which lingers on through to the finish. A nice, little cameo of hop bitterness arrives late and rounds off the back palate with decent length. Not bad, honestly…not bad at all. We are always a bit hesitant with this brewery as it’s been sold off to CUB but this one, along with the Alpha pale ale, would have to be their best two beers by far. Solid winter warmer.