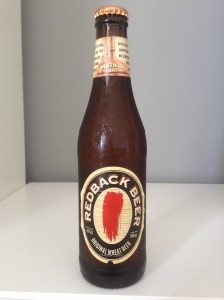 “Redback Original is Australia’s original craft beer — first launched in the late eighties. Produced around the time of the Americas Cup defence — Redback’s innovation and unique style took an Australia starved of beer diversity by storm.”

Not a bad brewery this one and we know we harp on about it all the time but we did lose a little respect after they sold out to CUB (Carlton united breweries). Served into a weizen glass the golden appearance is boasting exceptional clarity as the 2 finger white head gradually reduces to a light film on top. Reasonable head retention produces oily lace trails down the glass. The aroma is nothing more than ordinary with banana lollies and clove dominating. Hints of bubblegum, dough, creamy vanilla and wheat are also coming through. Mild-medium carbonation and body. Slightly soft mouth feel with a creamy texture. Taste is sweet, again like the aroma the palate displays bubblegum, banana and a subtle touch of spice. We don’t like to point out the bad in a beer but there is some really off flavour that we detect initially…something earthy. Potato maybe? We’re not sure but whatever it is it doesn’t work. Finishes with a lemon citrus freshness which goes a long way to helping this beer. 4.7% ABV. We weren’t at all pleased with this beer, although some may like it. Not for us.