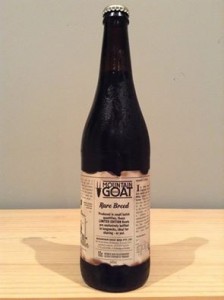 “Malt, hops, yeast and water. That’s all our brewers need to make great beer. Well, that’s what they have us think…Our latest Rare Breed is dedicated to the unsung hero of the brewing process: amylase, or Captain Amylase, as we like to call him. Amylase is an enzyme that naturally occurs in the malt, breaking down the carbohydrates into sugar, which feeds the yeast and kick starts fermentation. We gave the Captain a big job, making his namesake a big, malty Porter, and added a splash of dark rum at the end for fun! This is a classic American style Imperial Porter, dark and full bodied with a chocolaty aroma. The malt-rich flavour is complimented by the subtle sweetness from the rum and some molasses, and winds up with a gentle, lingering finish. Captain Amylase was first brewed exclusively for The Great Australasian Beer Spectacular 2016 (GABS) and we were so pleased with the response we received we knew we had to share it with everyone.”

Served in to a snifter glass. The opaque pour produces a tightly held finger of brown foam that gradually peels off and settles to a fine layer over the top. Not a great deal of lace but some random patches do manage to stick. Really dense and heady aroma here. We certainly get the sweet rummy tones leading out. Strong wafts of coconut reinforce the rum aspect handing it a Malibu-like character. There’s another beautiful, yet subtle fruity sweetness which comes off like fresh pineapple, it actually works in brilliantly. The aroma is filled out with your four to the floor chocolate, roasted malts, licorice and cocoa. Just divine. They’ve got that balance between sweet and roasted down pat here. The mouth feel is well rounded and viscous with mild Co2. Full bodied with a magnificently disguised ABV (7.7%). On entry we get a complex marriage of roasted malts, cocoa and a hint of that rummy sweetness creeping in. Actually, the rum is a little less pronounced as it is on the nose. It does, however, carry nicely over the mid before delicious flavours of chocolate and toasted nuts prelude a lengthy, roasted and ultimately sweet and sharp rummy finish. Highly impressive stuff from MG. Although you could look at them as sellouts (as they sold to Asahi in late 2015) the two lads from inner city Melbourne were adamant on sticking around to make sure the standard doesn’t drop. Well, it’s working because this is a bloody top notch porter. The rum accents are tied in superbly. This is one we’d definitely return to.