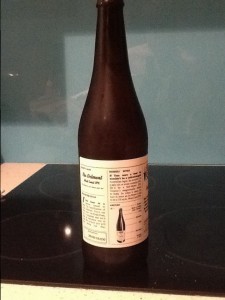 “An In-breed brew from our first ever On-Road-Goat, Tom Delmont. In The Delmont’s own words: “In June 2010 four friends went on a great beer adventure (Colorado, California, Oregon, Washington State, NY) and visited quite a few of the USA’s best brewers, including Green Flash, Ballast Point, Stone, Anchor, Sierra Nevada & Russian River among many others. I fell in love with the big, clean hop flavours and the incredible drinkability of the true West Coast IPA or, according to the San Diego guys, the San Diego style IPA. This beer is a direct result of that trip and my last six years in the craft beer industry.” As for what it is in the flesh, it’s a gleaming copper colour, with plenty of familiar citrus and pine aromas and a slightly resinous bitterness that’s there from the off but never gets out of control (unlike its namesake), instead being lean, clean and open to repeat visits. ”

Oh yeah we love this brewery, one of our most favourite Australian microbreweries. Strong typical nose of resinous pine, sweet peach and grapefruit. The label states cascade, chinook, centennial, Amarillo, and simcoe at the end. Mmm. Head is a bubbly, foamy head that maintains after the pour but it’s patchy. Nice copper pour. Mouth feel is a tad malty but very smooth despite the 6.8% alc vol. Can definitely taste the caramel malt but it’s subdued compared to the sweet bitterness. More grapefruit, lemon, and gentle peach on the palate. It’s a shame it’s a bit light on in the mouth at the back end. There is again patchy, soapy lacing down the glass. We love this brewery but we have had way better west coast IPA’s. Try Clown Shoes, 8 Wired, Dogfish Head or  Feral Brewing to name a few for a superb IPA.