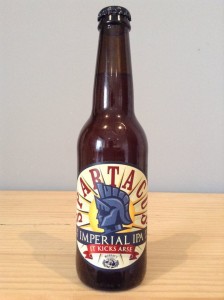 “Spartacus Imperial IPA lands another blow in the battle against bland beer esnlaving the Australian beer market. Big, robust and dangerously drinkable this titan of a beer gets a big X out of X for taste!  Too many hop additions to count.  Naturally brewed, rest-assured that Spartacus will still be on your side in the morning. So get-down and party like it’s MCMXCIX!”

Served in an IPA glass. The amber pour reveals some attractive copper hues when held to the light. Covering it is a persistent one and a bit finger head that retains well, drawing webbed lacing down the walls of the glass. The nose is one of astringent pine resins, ripe stone fruits and alcohol. Big grapefruit notes combine with fleshy fruits such as mango, papaya, pineapple and lychee. Quite boozy actually, but then again at 10% it is expected. It kind of has that charged up cocktail aroma with a chewy caramel malt backing. A very positive start to this imperial IPA. In the mouth it’s everything the label says it is. It’s aggressive, sharp and full bodied with a thick and dense texture. Co2 is good and the 100 IBU provides an assertive bitterness. There’s that much happening on the palate it’s almost too hard to isolate each flavour. Obviously the alcohol supports it all but this complex stewed fruit character is further complimented by chewy caramel and toffee notes. Mango and other ripe fleshy fruits like paw paw and rockmelon also feature heavily as all the flavours seem to hold up through the mid and land on the huge fruity and sharp finish that lasts an entirety on the back end. Really impressive stuff here from Murray’s. It’s like if Riverside’s 777 and Dogfish Head’s 60 minute IPA had a love child this would be the product of it. Kudos Muzz, this is a brilliant IPA.