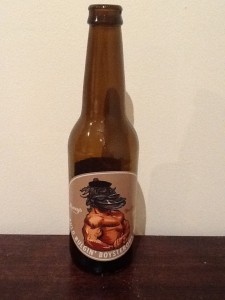 “Auld Bulgin’ Boysterous Bicep Imperial Stout is Australia’s first Smoked Belgio Imperial Mussel and Oyster Stout, originally conceived for the New Zealand ‘Beervana’ festival Media-brew beer challenge. The beer is a collaboration between the team at Murray’s and the Crafty Pint beer blog, brewed to reflect the origins of the parties involved and utilises Port Stephens Oysters for Murray’s Brewery (based at Port Stephens); blue lipped mussels from Victoria for Crafty Pint ; and green-lipped mussels, native to New Zealand per batch.”

This bad boy is from murrays and its the 2013 release. It uses smoked malt and belgian yeast from Trappist monasteries as well as port Stephens oysters, and blue/green lipped mussels. It pours a jet black that has a tan head that dissipated…leaving an oily lace on the glass. The aromas are of peat, booze, roasted malts, mild espresso and brine. The flavour is pretty intense. We get that peaty/smoked flavour combined with a briny/salty hit from the shellfish. Quite strong alcohol burn here, and sitting at 10% alc vol, it makes sense, but Importantly there is well balanced malt to alcohol backbone. Solid stout like flavours of chocolate, molasses, coffee and some spice. Medium to full mouthfeel here but low carbonation. There is also decent bitterness here. All in all, this collaboration with the crafty pint is brilliant and it’s about time Australia had an oyster/mussel stout that rivalled the kiwis. It’s smooth, yet pungent and well brewed.