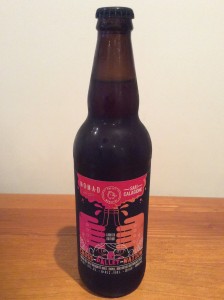 Wow, what a collaboration. Dogfish Head for us is one of the premier craft breweries. We salivate with anticipation. Poured into a schooner, lovely mahogany greets us with no head. Very much an amber ale appearance. On the nose, we get subdued sweet malts, very mild pine, and mild booze. First sip is interesting. Definite sharpness or tartness which must be the finger limes. The IBU here is 20 by the way. This upfront tartness fades leaving a subsiding bitterness, with that smoky/ash flavour from the malt, and a mild sweetness that must be the maple sugar. We don’t get a lot of hops really other than mild pine. Definite nutty flavours here which are either the malts used other than mesquite or the wattleseed. It’s almost coffee-ish. Maybe some mild dough yeast. As we get through the glass the sweetness is now obvious on the lips, like a sticky film. The relatively medium body actually seems lighter and for 8% Alc vol, it doesn’t really come into things as the combinations of flavours drown it out which is a testament to the brewing process. The smokiness really combining with the finger limes, and the nutty, almost coffee flavour are really the standouts here. Everything this beer says it does, it does. It’s a damn fine effort and we expected nothing less when Dogfish Head are involved. Brilliant!