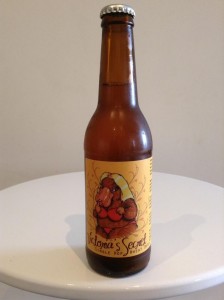 Edge brewing project, as they are known formally, is the amalgamation of two gypsy brewers from opposite ends of this earth. In one corner we have our very own Adam Betts (Northdown brewing) and from the other corner of the earth, namely Denmark, is Christian Skovdal Andersen of the internationally known Beer Here label. Together they have teamed up to produce this single hopped wheat ale which looks quite interesting to say the least. A chubby platypus in a bikini anyone? Not our idea of a Victoria’s secret model, but hey it’s not about glamours in bikini’s…it’s about the hops! So we press on. Served in a weizen glass. The cloudy straw-golden pour generates a healthy two finger crown that gradually deconstructs and retains at a decent 5-6mm covering. Laced well. The description on the bottle does say to expect a different aroma and they aren’t wrong. We’re getting wafts of acidic, sour lemon, slight funk, grapefruit, orange peel, wheat, dry, musty notes and a faint hint of spicy white pepper in the back ground. Certainly leaning more on the saison side than anything else. Still, quite a nice aroma. In the mouth it’s light on with an airy feel to it. Co2 levels are mild and the body is about medium. Pretty sessional stuff. Upon entry we get a really smooth fusion of citrus fruits, wheat malts and a touch of sour acidity. Muted hints of spicy pepper and grapefruit develop and carry through the mid leading to a dry, bitter finish with a fruity note to the back end. 6% ABV, so there is a little kick to it but it’s well restrained in flavour. To sum up it’s really not a bad beer at all, quite acidic though. It doesn’t detract from the overall flavour and character of the beer which is good. Good drop.