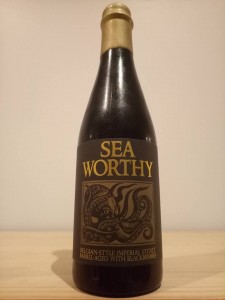 “A new way to look at an imperial offering. We brewed a Belgian imperial stout one year ago, aged it in bourbon barrels with blackberry puree.”

Appearance: Pouring a dense black with a thumb of brown foam on top. Steady reduction, settling to a fine film that produces a fine lace.

Aroma: Getting lots of the musty bourbon barrels initially. At first the blackberry notes were quite restrained but as it warms the vinous characters of the berry begin to open up. As it warms further we pick up a very mild salinity along with licorice and earthy undertones. Very dank, like it hasn’t seen the light of day for many years!

Flavour: Good transition from the nose. Getting plenty of aggression from the bourbon and the booze (13%) upfront followed up by a short cameo of blackberry, charred wood and molasses in the middle. It hits an earthy note as it rolls in to a roasty and robust finish which offers up more musty oak and bourbon on the rear.

Mouthfeel: Well weighted with good viscosity. Some sharpness to it but that’s expected when it weighs in at 13%. Quite the pleasant quaffer for such a big BA imperial stout.

Overall: A respectable drop but we would have loved to see the blackberries make more of an impact. It certainly has the foundations of a brilliant beer but it just didn’t seem to land that knockout blow for us. Still, it’s a solid beer.