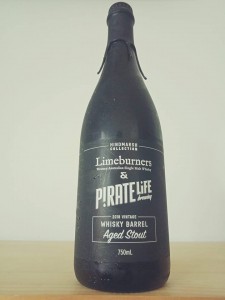 “The story of the Limeburners x Pirate Life Whisky Barrel Aged Stout truly begins many years ago when Great Southern Distillery founder Cameron Syme began to hear the tales of his rebellious Scottish ancestors, who gave up the whereabouts of their illegal distillery and used the reward money to start a new one. A successful career in law took him to the UK where he took every chance to visit the birthplace of whisky – Scotland. After years of research and planning Cameron distilled his first whisky in 2004 and hasn’t looked back since. Today Cameron’s team, led by distiller Benjamin Kagi, makes some of the best whiskies and gins in Australia.”

Appearance: Impenetrable black with a big and foamy three finger head forming on top. It gradually reduces to a thick overlay with a smattering of lace on the glass.

Aroma: Big, dense and viscous…as anticipated! The influence of the whisky is front and centre as it punches through with caramel, vanilla, a hint of spice and a honey-like sweetness. That all offsets the roasty and toasty elements of the stout beautifully. It’s quite amazing how they’ve managed such a pleasant nose considering the style.

Flavour: Absolutely delicious! This whisky is just made for this stout….the two combine incredibly well. There’s just the perfect amount of sweetness and spice in the whisky which is infused through the roasty, lightly charred and smoky notes and together they offer this decadent and super moreish flavour profile.

Overall: We among many others turned away from PL when they sold out but there is no denying the brilliance of this imperial stout. P.s let this baby warm up as she really reveals the true whisky notes once it does. Kudos PL!