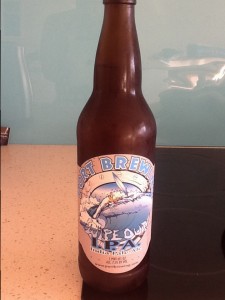 “Brewed to celebrate anyone and everyone who has ever paddled out into the best wave of the day, only to blow it and Wipeout in a blaze of glory. Our version of a West Coast Style IPA brewed with a measure of heavy handed San Diego dry-hopping resulting in an aroma bursting with fresh hop notes including Apricots and citrus rinds. A crisp, dry and very refreshing IPA with resonating hop character and a finish of grassy hop notes.”

From San Diego California, comes this massively hopped IPA, using no fewer than 5 varieties.. Centennial, simcoe, summit, cascade and Amarillo. Love the tacky label. Poured into a tulip glass, there is big carbonation here with a massive foamy head that takes time to dissipate, but still leaves a dollop of foamy head and patchy lacing all over the glass. We get pine, lots of tropical fruit, grapefruit, lime. Really resinous, perfume like. Usual light copper/golden colour with cloudiness. Mellow initial mouthfeel which builds into bitterness, then mellows a tad and leaves a pleasant lingering dry, hoppy palate. Almost an oily texture to the mouthfeel. Moderate carbonation also despite initial blast. There is minor booze burn here, it’s hidden nicely despite its 7.5% alc vol. This brew is 78 IBU. We love the smoothness and balance of the beer. We have had better IPA s but there is nothing wrong with this drop. Good effort.