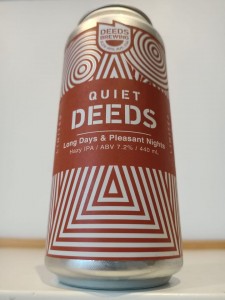 “Not long after I moved to Australia, I started using the phrase “Long Days & Pleasant Nights” to describe my new life to my parents. The phrase originally comes from the Stephen King’s Dark Tower series of books, which I read at university. Of all the adventures in those books, I always kept the phrase “Long Days & Pleasant Nights,” as they use it as a greeting in the series. We thought we could use the phrase as a greeting to the wonderful people out there that are enjoying our beers. And frankly if you want to say, “Hello, I’m an IPA,” you need to put a strong effort in that can.”

Appearance: Cloudy light orange to pastel gold…depending on which angle we look at it! A short white head doesn’t hang around long but manages a reasonable lace as it ebbs.

Aroma: Smells nice and fresh. Driven by juicy notes of pineapple, grapefruit, passionfruit, peach, melon and gooseberry. There’s also a hint of dankness to it – evergreen, pine and forest floor with that slight weedy-ness also happening. The grain bill offers a dry, spicy bread crust character alongside a pinch of oats. A well structured aroma.

Flavour: Seems to have a stronger focus on citrus…pithy grapefruit and orange peel with the sweeter tropical fruits i.e pineapple and passionfruit taking the back seat. Tasting the kinda sharp pine cutting through then the warming booze and assertive bitterness rolling in to a dry and slightly astringent finish.

Mouthfeel: Rather smooth initially then it turns harsh in the swallow. Medium body. The 7.2% ABV certainly adds a bit of sting.

Overall: We’re on a mission to find an Aussie NEIPA that can stack up against the likes of Treehouse, Monkish, Other Half etc. NEIPA’s like this are getting closer but we’re still so far off. The quest continues…