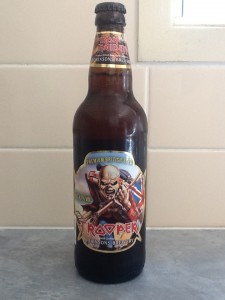 Well, not a lot to talk about here….beer-wise that is. The story of it is more interesting than the beer itself. Following on from that awful ‘Kiss’ beer comes this brew from the vocalist, Bruce Dickinson, of the British rock band ‘Iron Maiden’.

In collaboration with the Cheshire family brewers this is a traditional English ale pouring a clear golden amber with a thin white head which peels off to a collar with very minimal lacing. A dominant aroma of sweet English caramel malts, toffee, butter, grassy/herbal hops, nuts and bread. A little disappointing in the mouth it has a very thin texture, almost watery with mild carbonation. Lacking some serious body. Following on from the aroma the flavour profile offers dominant bready malts upfront. Some sweetness in the mid, maybe caramel or toffee with a nutty undertone while earthy and bitter notes finish off this slightly weak beer. At 4.7% there isn’t a lot to be excited about. Try one just to say you have drunk a beer brewed by a famous singer but if it’s a full flavoured traditional English ale you’re looking for then reach for the Fullers ESB, Old speckled hen or the Hobgoblin.