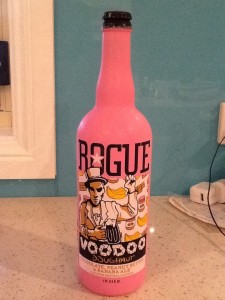 The third installment to the Voodoo Doughnut series, we are still thinking the bacon/maple is on top but we are excited about this one as well. Again, similar to the other 2 in this series, it’s pouring a dark brown/black with a good two fingers of head that leaves soapy lacing on glass. That rich chocolate aroma that is underlying in all of the doughnut series is evident, with the addition of that smell from banana lollies. We do find it hard to get any of the peanut butter character though. There is a sharp, metallic hit at the back palate and we can’t work out where it would be coming from. Low carbonation like a good ale makes this brew, like all the others, very drinkable. This brew is 5.3% and has a IBU of 25. The chocolate malts still dominate here though. We feel that a bit more of the peanut flavour would have been lovely. This series is great though really showing the experimental side of dessert beers. We love the combinations but to conclude, the bacon/maple has come out on top. Well done Rogue.