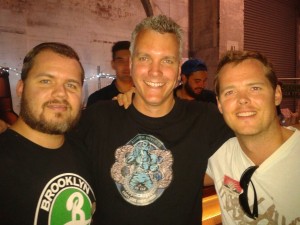 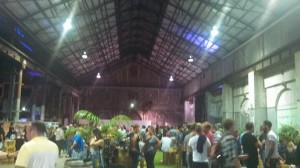 What a night! After kicking the arvo off at the KB sinking some warm up crafties we made our way to the Redfern carriage works. We walked in to an absolutely massive hall with dozens of beer stalls lining the side walls, scored a good table and we were underway. What we were seeing was lots and lots of smaller breweries on the way up such as Kaiju, Brew Cult, Willie the Boatman, Batch, Shenanigans & Riverside. The latter being one of our absolute favourites (hence the photo with Dave, the head brewer). Bigger breweries such as Mountain Goat, 4 Pines, Redoak & Young Henry’s were also pouring some of their best as usual. The addition of some cool little mobile food stalls was a great move with some tasty burgers the best seller for us. The only downside is that it went way too quickly!! Great night with great atmosphere, great company and great beer. Looking forward to the next one already.