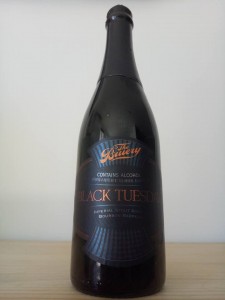 “For most of you, Black Tuesday needs no introduction. Released on the final Tuesday of October every year, this beer is our take on a bourbon barrel aged imperial stout. Varying slightly from year to year, the ABV hovers around 19% each year that we release it. Rich caramel, toasted malt, vanilla, burnt wood and anise are just a few of the many flavors in this rich, decadent imperial stout.”

Appearance: As expected it’s blacker than the ace of spades. It forms a wispy head which instantly snaps back to the rim. Seeing scarce lace as we imbibe.

Flavour: Follows on from the nose with this outrageous intensity. The booze (18.9%) is probably a little too excessive but to its credit there is a lot of other flavours happening. Apart from the warming bourbon and barrels are subtle hints of vanilla and treacle, heavily roasted malts, bitter dark chocolate and licorice. The booze intensifies again through the mid and leads in to the fiery finish which really goes the distance.

Overall: If there’s one thing we can stress it’s this….share it between two people, at least!. Honestly it’s too boozy, we would love to see them pull it back to the 13-14% mark. It’s a shame because there’s a tonne of exceptional flavour underneath it.