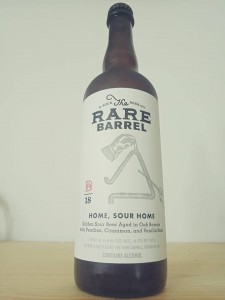 “Home, Sour Home is a blend of golden sour beers aged in oak barrels with peaches, cinnamon, and vanilla bean. Notes of baked peaches, with hints of cinnamon spice and smooth vanilla will leave you craving some homemade peach cobbler. We originally released Home, Sour Home as our first Founders Club release. In its 2014 debut, DRAFT Magazine considered Home, Sour Home one of “The 25 Best Beers of 2014.”

Appearance: A kind of milky off-yellow complexion with a wispy head which retreats to the rim. Laced fairly well considering the lack of retention.

Aroma: As far as sour aromas go this is right up there. The peach notes coming through are incredible! Also picking up tangerine, orange sherbet, sweet earthy spice, vanilla, peach skins, candied lemon and buttery flaked pastry. She certainly shines full of lacto sourness…almost has that yoghurt-like scent to it. Magnificent!

Flavour: Lovely focus on the peaches again…definitely front and center with strong support from the slightly acetic lemon juice, woody oak, creamy vanilla and subtle apricot. The peach flavour really carries through nicely, across the mid and in to the finish which reveals more stonefruits i.e apricot and rockmelon.

Overall: Our only gripe with it is the lack of oak character and spice. Thing is there’s more than enough aroma and flavour already happening so we can forgive them for that. All in all it’s a respectable sour.