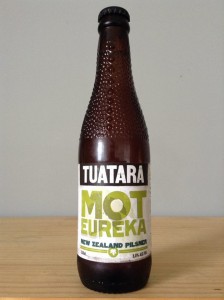 “Long ago in 2001, we had a eureka moment. We’re miles away down here, so why copy their beers? Using all local hops from the Motueka area, we perfected this 100% NZ Pilsner. Crisp, firm bodied with notes of citrus, it spawned a whole new style of beer, now proudly sent offshore to faraway places like Europe.”

Served in a footed flute glass. Mot Eureka pours a bright golden hue with stunning clarity. It’s capped off with an extremely well retained three finger head that leaves a healthy set of rings as it ebbs.
NZ Pilsners are fast becoming a favourite for us. We reckon it’s part due to the hops, in the case of this Pilsner they’ve used the Motueka hop (among others) which is a cross-breed with the Saaz hop so naturally it fits in perfectly with this style of beer. Aromas of lime, citrus, herbs and white wine give the beer a distinctly green character. Awesome stuff.
The texture is crisp, dry and bubbly. The 44 IBU is slightly inflated and it’s definitely felt in the mouth. Good carbonation, light-moderate body.
A swish around the mouth offers a lush mix of fresh herbs, zippy citrus and hints of pomelo. A restrained malt base hints at grainy and slightly toasty notes in its delivery as it leads in to the citric and bitter finish. Nice duration, almost has an IPA-like bitterness on the back palate.
The brewers reveal that this beer is a revamped version of the Bohemian Pilsner they used to brew way back when. We remember reviewing that as well and we can say that this version is considerably hoppier than its predecessor. Still very nice, one to surely please the hop heads though. Fine offering.