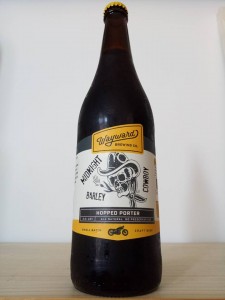 “Is it a porter or a black IPA? Using malt as dark as the soul of the beast gives The Cowboy its deep mahogany hue, juxtaposed over an aroma of hops that tradition might say belongs not in a Porter but in a beer of a sunnier disposition. The Cowboy laughs in the face of convention, preferring the company of those whose minds have been enlightened by the everlasting wisdom of Ninkasi.”

Served in an English pint. It hits the glass with a cola hue and a loosely packed two finger head on top. Retention is good though, but in saying that the lacing is sparse, wet and streaky as it follows.
The brewers certainly aren’t lying when they say this is a “hopped porter”. The nose displays distinct black IPA characters with its bold and roasty malt structure underneath a piney and citrus-laden hop profile. It fills out with a lovely blend of milk chocolate, cocoa, toffee and subtle charcoal. Nicely layered aroma indeed.
The flavour is similar to the aroma in terms of that well struck balance between roasty malts and citrusy/piney hops. Although it seems to lack that density the aroma possesses. Some fleeting hints of chocolate and a bit of cocoa powder here and there as well. The finish is well balanced with a subtle roast riding the dry and bitter hops to the back palate.
Due to the indecision between a black IPA and a porter the mouth feel appears to cop most of the blame. It becomes a little thin and slippery as it warms. Still, the delicate bitterness and co2 holds it up.
It’s a pretty decent drop. There’s a couple of things that detract but essentially it’s an enjoyable porter that has been simply spruced up with an extra helping of U.S hops. Not bad.