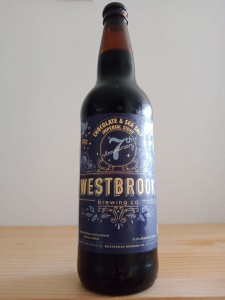 “For our 7th Anniversary Beer, we went big on the chocolate and added a little salt to make it interesting. Luscious notes of liquid cocoa and a smooth salinity make this beer deliciously decadent.”

Appearance: Pitch black with a quickly fading dark brown head. It forms a thin halo but still manages a healthy lace as we indulge.

Aroma: Dark and devilish. Really has that dessert stout thing going on…tonnes of chocolate, licorice, vanilla, red peppers, cocoa, marshmallow, charred malts and mocha. The addition of sea salt is a bit of a masterstroke. We were a bit hesitant at first but it really adds a nice touch of savoury salinity and balance.

Mouthfeel: Full bodied but not as thick and dense as most imperial stouts. Could be the lack of barrel aging perhaps? Low co2. Very well concealed ABV (9.5%).

Overall: For a beer that we were a little unsure about it has really come through. It’s big and bold yet sweet and nicely balanced. And let’s not forget the risky addition of sea salt which in a way was the quiet star of the show. It’s our first crack at this American brewery and we’re impressed!