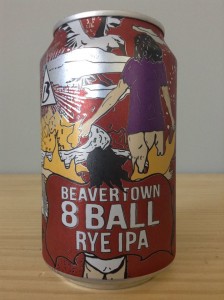 “Dry Nevada desert! never-ending vistas. Americana. This brew is a nod to the big IPA’s of the US. A big chunk of Rye is used to give the beer a spicy, earthiness, mashed up with Cara malts to create a rich, bold mouthfeel. Zesty Southern hemisphere and american hops are used in abundance to balance the residual sweet malt character. Masses of dry hops are plied after fermentation to spike a wild blend of tropical, spicy aromas.”

Served in an IPA glass. It pours to a murky orange hue with a dense haze laced through. A healthy three finger crown is generated which gradually reduced to a thick blanket that leaves blotchy lace trails in its wake. Looks fantastic! One whiff of this and you’d be excused for thinking it was another big, hoppy IPA from a well respected west coast American brewery. These guys are English?!? The aroma just pops. Smacking us in the face with bold and bright tropical fruits, orange peel and bitter citrus. The rye works its way in by stealth, adding that subtle peppery spice in the background. It also has that kind of resiny pine/cedar wood shavings scent to it too. Brilliant aroma. In the mouth it isn’t as aggressive as we thought it was going to be. The texture is dry and bitter but it’s surprisingly smooth and super drinkable. The IBU comes in at a decent 65 and the 6.2% ABV adds a little warmth but it doesn’t devastate the taste buds. Superb balance in this rye IPA so far. The flavour isn’t as snappy as the aroma but again balance is key. Upfront we get spicy and woody rye malts with a hint of orange peel and tropical fruits to sweeten the deal. The restrained bitterness is introduced midway as those resiny pine/ cedar-ish notes lead in to a bitter and spicy finish. Ok, rye IPA’s are one of, if not, our favorite styles of beer so we do have to keep checking ourselves when reviewing them. But this one deserves every bit of credit thrown it’s way. It’s big, hoppy, spicy and bitter but a brilliant balance keeps it highly palatable and down right delicious. A solid drop, we’d certainly buy again.