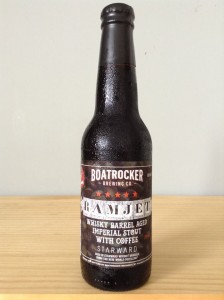 Served in a snifter glass. This beast of a beer pours like engine oil with a finger of brown foam forming on top. The head quickly collapses to a ring that doesn’t manage a whole lot of lace as we indulge. We recall being absolutely blown away by how good this stout was a few months ago for SCBW. Not one component has changed as this brilliant beer flaunts heady aromas of licorice, molasses, whisky, espresso coffee, leather, dates, chocolate mud cake and a subtle peppery/rye spice to boot. Phenomenal! We’ve said it before and we’ll say it again, it has uncanny similarities to the Founders KBS. As it enters the mouth it runs over the tongue like silk. The 10.6% ABV is so well buried it’s mind blowing. The texture is thick but it has an oily viscosity that adds another level of complexity. Co2 is next to non-existent but that works just fine with heavy richness of this beer. The palate ignites with a sharp booze burn that is instantly enveloped by a rich malt sweetness along with espresso, dates and an earthy oak flavour. It all assembles on to a rich chocolate character in the middle which leads in to a warm boozy finish with rich chocolate, coffee and spicy rye notes on the rear. The length is unbelievable, it seems to just go on and on.
What a top shelf drop this is. The fact that Boatrocker have chosen Starward whisky barrels also deserves a mention because they once contained a multiple award winning Australian whisky. This is an outstanding beer….we’re confident in saying that this is Australia’s version of the KBS.