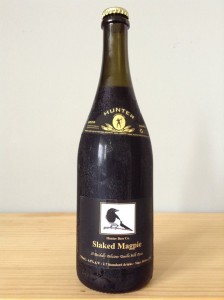 “Based on our trophy winning porter recipe, this tasty brown ale has a little vanilla and some lactose (milk sugar) thrown into the brew. It makes for an easy drinking ale with a bit of vanilla, coffee , mocha & a touch of sweetness. Very popular! ”

Served in a beer tulip. We’re met with a deep brown centre that works to a gorgeous mahogany edge. A tanned two finger head develops but it recedes to a fine film with some scattered patches of lace left in its wake. The nose is definitely dark, toasty and nutty but it also touches on this sweet and lactosey vanilla scent that works in beautifully. We also pick up a few interesting undertones – we get an almost oak/woody note, charcoal and a hint of marzipan. Not bad at all. In the mouth it’s surprisingly lighter and more buoyant than we were expecting. The body sits around the mild-medium mark and to add even more session ability the 4.5% ABV is expectedly passive. The front palate is pretty timid with mild toasty notes, a hint of cola and subtle chocolate presenting. Not much in the way of distinct flavour through the mid as it rushes in to the slightly sweet finish that reveals soft chocolate, vanilla and nutty flavours on the rear. For us, something appears to be lacking. Whether it be the ABV, the lifted Co2 or the restrained flavour we’re not sure but it’s missing the big, rich malts and a teensy weensy bit more vanilla would have gone a long way. It’s not a bad beer by any means we just feel it needs a bit more oomph.