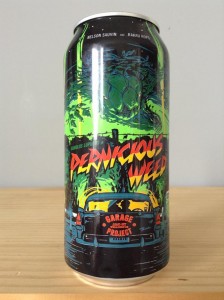 “The arrival of hops to the brewing scene in England in the 1500s led to a moral panic, hops were described as “a Wicked, & Pernicious Weed”, feared to bring the downfall of civilized society. Thankfully, they were right. Pernicious Weed is a celebration of the NZ-developed hop varieties Nelson Sauvin and Rakau. Huge grapefruit flavour in a worryingly-drinkable strong IPA.”

Served in an IPA glass. Pernicious weed pours a hazy amber-orange with a sturdy two finger crown forming on top. The head gradually retracts to a thick overlay that splatters the glass with blotchy lace trails as it ebbs. The use of Nelson Sauvin (our favourite NZ hop variety) and Rakau hops are presented brilliantly on the nose. The olfactory’s are met with a big, resinous and dank aroma that offers everything from vines and rotting leaves to kiwi fruit and honeydew. One of the traits we love most about NZ hops is this super fresh and luscious green character they impart. They’re a perfect match for big and resinous IPA’s like this. Excellent stuff. The texture of the beer is quite thick and creamy with a slight warmth from the 8% ABV. The 80 IBU certainly adds an assertive bitterness but it’s contained nicely. A fine overall balance in the mouth. Upfront we get tonnes of bitter citrus, pine resins and vinous notes but a line of fruity sweetness comes down through the center offering a lovely contrast in its delivery. A dry and hoppy bitterness along with an evident alcohol warmth gets introduced across the mid as leafy and herbaceous notes punctuate the finish. Great length as well. Tell ya what, garage project can do some pretty average beers but when they get it right, damn it they get it right! This DIPA is full on, bitter and adventurous but it’s delicious and a highly enjoyable drop for hop heads like us.