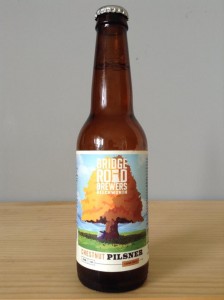 “A unique Australian Pilsner, brewed in Beechworth from Chestnuts grown locally in the Beechworth and Stanley hills. The Chestnut Pilsner also uses Galaxy hops from the Rostrevor Hop Garden in the nearby Ovens Valley. As with any of the worlds best pilsner the most important ingredients is time, and we have allowed this beer plenty of it, with each batch aged for around 3 months before release. Bridge Road Brewers have created a gem of a beer through experimenting with local produce, a truly local brew!”

Served in a footed flute glass. She pours a pale straw-golden hue with a finger of tight foam capping it off. The head gradually reduces to a fine film that weaves a healthy lace down the walls of the glass. The aroma provides a lovely and distinct crisp freshness. We get snappy notes of zesty citrus, grassy hops, some grainy malt sweetness, spice and a soft earthy/nutty character. All quite mild really. In the mouth it’s nicely carbonated, light on and crisp in texture. It fills out with a decent body as a very delicate bitterness ties it all in. She’s a super sessional number so far. The flavour continues with a light and zippy citrus note upfront. Finally we begin to see some of the nutty components joining the party as it hinges on an earthy malt sweetness through the mid. Some very subtle bready notes then lead in to a mild nutty finish that pulls up a little short on the back palate.
We recall having a few of these on tap at the brewery a couple of months back and they were much better. Whether it simply tastes better on tap or it hasn’t aged well (bottled 14/6/16) we’re not quite sure. Still, it’s crisp and the nutty characters do come through, albeit conservatively. Look, it went down well it’s just nothing overly memorable.