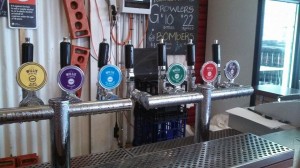 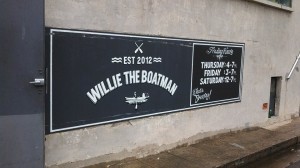 We rocked up on a miserable and rainy Sydney day but instantly a light shone through the heavens and lit up the 7 tap system as we tapped our fingers together doing our best “excellent” Monty Burns impersonations. After much craft beer talk with the approachable lads behind the bar we kicked the afternoon off with their Gose. We were told they usually pair the Gose up with a shot of peach schnapps to offset the sourness but they were fresh out of schnapps so a piece of apple flavoured marshmallow was in it’s place – and might we say it was a good pairing. The sweetness in the marshmallow counteracted the mild sourness in the beer well. We were off to a good start. We moved on to the strong American lager next followed by the golden ale (which to our surprise was one of the favourites), the pale ale, the bitter, IPA then finished off with their Black Bunny dark ale. We were really impressed with the quality of each and every beer, what was even better was the Gose and the Golden ale were untrue to style but for us, the best 2 beers of the day. The Black Bunny was also really tasty. We liked the feel and atmosphere of the place too, set in a transformed factory, the furniture is very shabby and rustic but it works well with the decor of the place. Cool tunes and a view of the tanks out the back, this newly opened brewery looks set for big things. And what better way to finish off a brewery visit than a good chat with Pat (the head brewer). Upon reflection it was a fantastic arvo, very impressive considering they only opened up to the public 5 weeks ago. Only downside was the taps were over-gassed and the beers too heady so they couldn’t fill up our growlers….oh well it’s a good excuse to go back 🙂