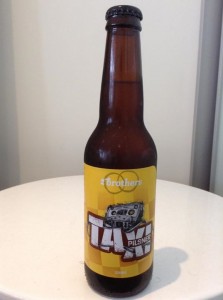 “Her name was Lola, but she was no showgirl. Andrew’s first car was an ex-taxi with 450,000k’s on the clock and the fain, but definitely-there smell of old passengers. But it was his pride and joy. And seeing as I got to ride shotgun, I hardly complained. Except that the radio didn’t work and there was a bloody horrible mix tape stuck in the stereo. Andrew kept telling me it was better than nothing. But I still think knowing all the words to Barry Manilow’s Copacabana is a bit creepy”.

We have had the pleasure of trying a few of this breweries beers already and they are all tasty, true-to-style beverages that consistently pick up awards. This pilsner comes decorated with a silver medal from the 2008 Australian international beer awards and a gold in the 2013 beer awards. Served in a flute glass. The clear golden amber appearance offers a lovely bright glow and almost full clarity. Good carbonation levels with a tonne of fizz streaming up and forming a decent finger’s worth of head that steadily deconstructs and holds tight at a thin covering on top. Reasonable head retention with some healthy lace trails. The first whiff yields a lot of bready malts and a sugary, artificial fruit sweetness. No sign of DMS which is good but we are getting a slight soapiness coming through. Maybe an undertone of tangerine, grain and some straw here as well. In the mouth it’s light as a feather with a slightly thin texture. Moderately carbonated. Super sessional though. Once the liquid slides down the back of the tongue a slightly sweet, yet grainy malt flavour is omitted, gradually developing a soft grassy hop note as it hastily moves through the mid-palate. Not a lot changes as it’s rounded off with a short doughy finish. Seems to drop out on the back palate which is a bit of a shame. 4.7% ABV. Look, if you’re after an easy drinking beer you can smash down on a hot summers day this is your beer, from a craft beer bloggers perspective it’s just another pilsner. Not bad, not great.