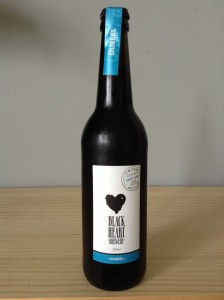 If there was ever anyone more trustworthy with your craft beer it would be these two blokes. Behind Black Heart brewery are two surgeons – a cardiac surgeon and the other, a perfusionist. Not only do these guys posess the skills to save lives (or pump your stomach after a tipple too many) they also have some brewing prowess, boasting a huge range including a Bohemian Pilsner, a Dunkelweizen, a Christmas ale and an Imperial Stout. Not to mention this Dubbel, which we’ll stop talking about and pop open!

Served in a beer tulip. The appearance offers a rich mahogany below a finger and a half of loosely packed tan foam. The head recedes quickly to a collar with scarce lace trails being omitted. Quite a strange aroma emanating here. The main one throwing us off is this unwelcomed scent of chlorine. Our guess is that the hops and the rich malts are clashing instead of combining, creating this ultimately muddled aroma. There are subtle hints of toffee and dates but this slightly tart/citric and almost vinegary fragrance is off putting. Disappointing. In the mouth it’s a little thin with a slightly sour feel. Mild Co2 and mild-medium body. What has been done well is the masking of the 7.4% ABV. Average all round so far. The flavour profile opens up with a kind of sour/vinegary character that is quite foreign to the traditional Dubbel. Once all the sourness settles we finally get a hint of caramel and dark malts in the finish. Even in the finish, unfortunately, we can still taste this persistent sour citrus flavour . Extremely bummed out by this Dubbel. We reviewed their Tripel a couple of months back and were surprised at how good it was. This brew, though, is confusing and far from what we like in a Dubbel. Didn’t like it at all.