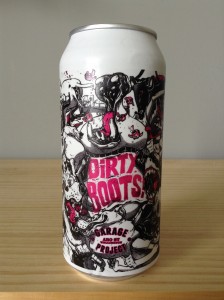 “Hop into the mosh pit. Dirty Boots, grunge inspired all American pale ale, especially for Music2Brew2, a hard core, hoppy celebration of the tunes that inspire the beer we brew.”

Fantastic artwork happening on the can. This APA was brewed for Garage Project’s “Music2brew2”, an idea that celebrates beer and food with a focus on how music can inspire creativity as much as anything else. We’re still trying to work out how the artwork fits in to it but ‘Dirty Boots’ was inspired by the brewers love for the band Sonic Youth.

Served in to a shaker glass. The body displays a hazy amber-orange hue with fine carbonation. A two finger crown is formed but it gradually reduces to a thin sheet on top which laces reasonably well. The olfactory’s are aroused by this big tropical fruity aroma. It almost reminds us of a solid American IPA. While it’s brimming with tonnes of ripe citrus fruits, there’s a slighty dank piney/resinous element here too. Plenty of fresh herbals coming though as a gentle malt sweetness holds it all together. Very nice on the nose. Quite smooth and dry as the liquid washes over the tongue. An IBU level is unavailable but our guess would have to be somewhere around the low-mid 60’s as it’s quite aggressive from beginning to end. Medium Co2 and medium body. Even drinks like a solid IPA! As opposed to the aroma, the front palate takes on much more of a citrus approach (orange, mandarin, tangerine) along with this big grassy bitterness. A somewhat dry, bready malt is introduced across the mid but it’s futile as a sharp piney hop bitterness leads into an aggressively dry and fruity finish. Good length on the back end. Well it’s certainly an American pale ale. For us it’s no different to an IPA. A slightly more prominent malt profile would have been nice but take nothing away, this is a damn fine APA. Tasty stuff.