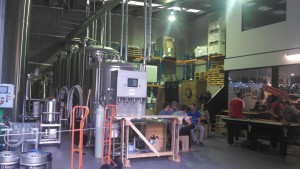 When we caught wind of Dave (now the head brewer of Akasha) leaving Riverside brewing we were absolutely gutted. As it wasn’t long after the release of their almighty 777 imperial IPA that he parted ways, we feared the 777 would be doomed, put in the trophy room never to return. Thankfully our fears were eased when a new batch of 777 was brewed and to top that there was news that Dave along with business partners Wesley and Ben had opened their own new brewery in Five Dock called Akasha. Everything had turned out peachy! We thought it was high time we went and checked out the operation after a tap takeover at Sweeney’s revealed the brewing prowess that this bloke possesses. Just off Parramatta road sits the transformed warehouse that is largely taken up by the impressive stainless steel tanks and fermenters that met us on arrival. A neat little seating area equipped with a pool table and a dart board is where you end up after choosing either a paddle or a middy from the little bar inside. The selection is small but bloody delicious, their core range consists of 4 hop-forward beers that include a Lager, Pale Ale, IPA and an Amber Ale, all of which are highly drinkable, hoppy and super clean. The 2 seasonals were an American Brown Ale and the Korben D Double IPA which, for us, is Dave’s equivalent to the 777. And what would an awesome little microbrewery be without some really friendly, informative and personable staff? The guys (and girls) behind the bar were legends and certainly added to the mad vibe we were enjoying while we were smashing down some top quality tipple. Great beer, great people, great music = great afternoon. Cheers guys we’ll be back.